In the fourth blog in our ‘mmWave and the 5G wireless revolution’ series, CTO and Founder Ray McConnell explores how mmWave networks offer consistent high-speed wireless connectivity in the most challenging of environments, such as on moving passenger trains. 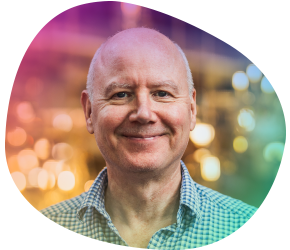 Trains are 120+mile an hour moving villages of many hundreds of passengers with valuable time on their hands who should expect to have reliable internet access and mobile connectivity as a standard. The superfast 5G and Wi-Fi wireless mobile platforms demand data-intensive applications and now passenger HD video streaming apps are mundane.

The aggregate backhaul network bandwidth required to provide a consistent service for all passengers and train services is substantial and grows for larger trains. But the dynamic environment for providing multi-gigabit connectivity to high-speed moving vehicles remains a specialist challenge which currently isn’t being met by mobile wireless infrastructure or Wi-Fi based technologies.

Ofcom’s report concluded that the backhaul demand on a busy mainline train will exceed 1 Gbit/s, while on a packed commuter train this would increase to 2-3 Gbit/s. They concluded mmWave spectrum (defined as that above 25 GHz) only has the sufficient spectrum to support this level of demand. Ofcom recognised that the licence exempted 66-71GHz technology not only has sufficient, but significantly more additional, channel capacity (‘significantly’ meaning 5-10x more).

But what the report couldn’t include was the technology requirements needed to support an actual solution in such a hostile wireless environment, knowledge that could only be gained from many years of development and testing on proving grounds.

Over these years Blu Wireless has been rigorously developing and testing a series of technologies that, when combined, specifically meet and exceed the railway backhaul present and future needs. A fully rail certified technology platform embodies all this work for both trackside and train-top environments.

During that development time, Blu Wireless also worked closely with Ofcom (and subsequently The European Conference of Postal and Telecommunications) on regulatory changes to the 66-71GHz mmWave bands to closely align them for these kinds of private networks and applications.

Blu Wireless’ sophisticated 5G mmWave technology has been developed specifically for track to train applications both at a wireless link and at a network systems level, designed to connect into the trains on board network.

Each wireless beamforming link has been engineered to track fast-moving vehicles and mitigate any associated Doppler effects. The links operate over extended km ranges at multi-gigabit speeds which can triple when in a station, and when using multiple links the network can approach 10 Gbit/s.

In practice, the technology has been proven and trialled at Network Rail’s Rail Development and innovation Centre (RIDC) and the Island Line on the Isle of Wight. It is currently being rolled out on South Western Railway through our partnership with evo-rail. Passengers on the busiest section of Britain’s railway network will benefit from multi-gigabit connectivity onboard 230 South Western Railway trains, enabling best-in-class, on-train Wi-Fi services.

At a system level, the wireless links are managed by an Intelligent Control Plane (ICP) technology.  The ICP is a software defined wireless and networking controller specifically developed by Blu Wireless for fast control of mmWave vehicular dynamics. Its development support package is versatile and includes usage of software libraries, which cover a range of other challenging vehicular dynamic requirements, including security.

The combined wireless link and ICP technologies provide an ad-hoc choreographic dance of multiple wireless beams and network connections, reacting to an ever-changing hostile environment made of all manner of trackside impediments, such as steel posts, signalling boxes, overhead stanchions with pantograph clutter, many tunnel types and station platforms.

The train’s on-board network is insulated from all this activity, it’s provided with a stable high-performance connection that can be used for all services such as onboard passenger Wi-Fi or 5G Small Cell downloads and operational on-board CCTV security data upload along with vehicular safety sensor telemetry data.

This level of technology development and its performance has provided a compelling value proposition for train connectivity. This 5G mmWave technology will spearhead the future of how passengers will experience connected rail travel going forwards, and will accelerate the pace of change for further innovation of other on-board rail network technologies.

If you would like to find out more about Blu Wireless and our mmWave innovations, please get in touch.